Description of Аудио басни Крылова на русскомWill help you brighten up your leisure. They will teach the child justice, 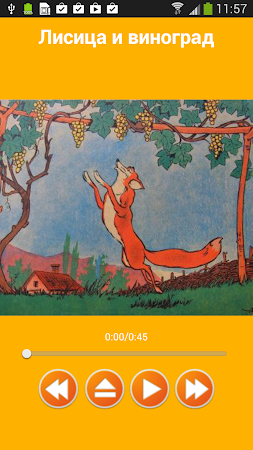 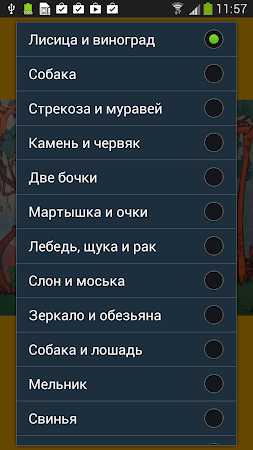 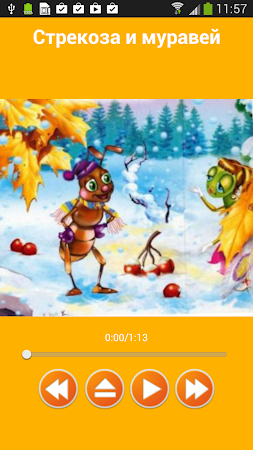 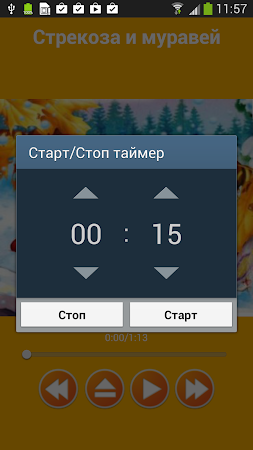 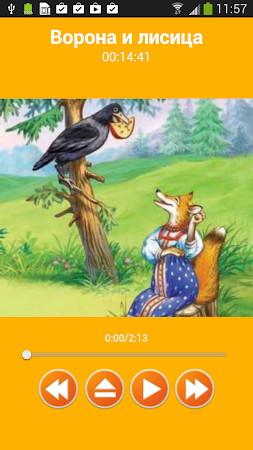 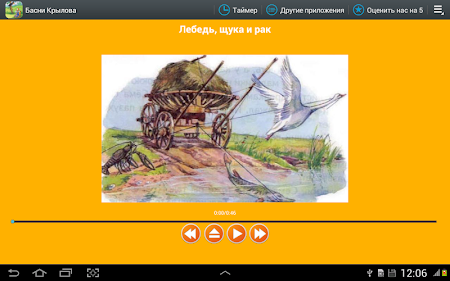 Will help you brighten up your leisure. They will teach the child justice, virtue, love and goodness. Touch the pearls of Russian poetry, fables and prose. We learn children's poems and fairy tales with the child.
Content of Android collection:
– Peasant and Worker
– Fox and grapes
– dog
– Dragonfly and ant
– Stone and worm
– Two barrels
– Monkey and glasses
– Swan, pike and cancer
– Elephant and pug
– Mirror and monkey
– Dog and horse
– Miller
– Pig
– Lamb
– Donkey and man
– Wolf and cat
– A Crow and a fox
– Quartet
– Old man and three young men (instructive story)
– Wolf and Fox (rhyme for children)
– Lion and Fox (fable)
– Hardworking Bear (children's poems)
A fable is a poetic or prose literary work of a moral, satirical nature. At the end of the fable contains a brief moralizing conclusion – the so-called morality. Characters are usually animals, plants, things. In the fable, the vices of men are mocked. Fable – one of the oldest literary genres. In Ancient Greece, Aesop was famous for writing fables in prose. In Rome – Fedr. In India, the collection of fables "Panchatantra" refers to the III century. The most prominent fabulist of the new time was the French poet Jean Lafontaine.
Ivan Andreevich Krylov – Russian poet, fabulist, translator, employee of the Imperial Public Library, State Counselor, Full member of the Imperial Russian Academy, ordinary academician of the Imperial Academy of Sciences in the Department of Russian language and literature.
I.A. Krylov is best known as the author of fables (more than 200 in total, were published in nine collections between 1809 and 1843, were reprinted several times). The plots of a number of Krylov's fables go back to the fables of La Fontaine (which, in turn, borrowed them from Aesop, Phaedre, and Babri), although there are many original scenes. Many expressions from Krylov's fables became winged.
Fable animals are fables in which animals (wolf, owl, fox) act like a human being. Fox is peculiar to cunning, to owl is wisdom. The goose is considered stupid (as well as the donkey), the lion is courageous, the snake is insidious. The qualities of fabulous animals are interchangeable. Fabulous animals represent certain characteristics of people.
If you and your children like our Android collection, then you may also be interested in our following applications:
– Audio tales for children
– Audio tales of Pushkin offline
– Andersen's audio fairy tales (compilation)
– Grimm Brothers audio fairy tales
– audio poems Chukovsky performed by the author for free
– audio fairy tales of Russian writers
– Soviet-era children's songs